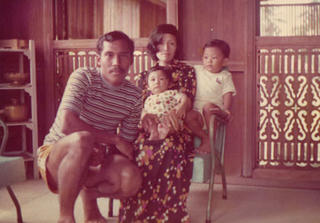 Note : Written few years ago (circa 2002-2003, bad grammer and all). Tribute to Syed Abdullah B. Syed Mustaffa, allahyarham. A Father, husband & grandfather. Al-fatihah.

19th November 1999. I was at home in Taman Rinting, barely awake when a call came and everyone was suddenly up and ready. It was in the middle of Ramadan. The day was normal and everyone were in no mood to go to the hospital. It was Saturday, there were no sound of school busses and cars dropping school kids at the primary school nearby. It was so quiet that it was actually deafening. Everything was quite as the Toyota Cielo left the house with my two brothers tagged along in their own cars. My older sister opted to stay back. Just incase anything came up. There was nothing in his eyes other than emptiness and some hope.

I don’t actually remember who was driving that day. It might have been my brother. My mother or myself. During the short drive to Hospital Penawar, many things going through my mind. Only yesterday morning that I remember helping my older sister to prepare breakfast for my father. It was porridge and mashed potatoes. In a split second things got complicated as his body started to shake nervously, in a subtle but alarming way. We called the ambulance and everybody waited anxiously for the result.

My father just got home after spending nearly 9 months in various hospitals. First, it was in Hospital Sultanah Aminah before being transferred to Johor Specialist Hospital at Jalan Abdul Samad. He spent a couple of months there to undergo some treatment to check and improve his condition. My mother spent the whole time there, it was like a second home for my mother. She slept there and accompanied my father, going back to Taman Rinting only if anything important came up. She never drove at night before, let alone in a thunderstorm but in those days one could only understand what true love really means. She braved anything that comes by, as nothing was impossible to her. As I was studying then and live in Ulu Tiram, I wasn’t able to visit my father that often. My second brother was working back and fort from Pasir Gudang to Bintulu and Kerteh, so every chances that we had we would went to the hospital. The condition seems to be under control and doctors were trying to find the cause of the illness. My brothers and I would sit outside the main entrance, sipping extremely hot coffee from the vendor machine and checking out the hot cars the doctor’s drive in.

Everything was fine a year ago. It was still in the midst of Hari Raya. My father was getting ready for work when a sudden pain on his back left him lying and not being able to stand up, let alone walks. An ambulance had to be called to our house to pick him for a checkup in Hospital Sultanah Aminah. He was released a couple of weeks later but was advice to relax at home for the time being. We were quite shock as my father doesn’t really have any major illness prior to this incident. He was really active, likes to jog and occasionally plays soccer. He was a very health conscious person and doesn’t smoke. He was a workaholic and dedicates much of his time to work and family

We spent some the time in our house in Ulu Tiram and his condition wasn’t improving. Just seeing his taking the stairs to the second floor was really painful for us. He took one small steps at a time, and managed to complete it in just less than an hour. It was really different, seeing a vulnerable side of my father that has always been very strong and active all his life. In a split second, everything changes, quite drastically. My father, being a stubborn man that would not just let fate had the better of him, tried to fight it but to no avail, until he was again admitted to hospital for the second time, to Johor Specialist Hospital.

He was diagnosed of having a kind of bone cancer. An injury that might occur during a sporting activity might lead to the damage of my father’s spine and this lead to more serious injury. My father was the kind of person that doesn’t like to go to clinics or hospital whenever he wasn’t feeling good. He rarely took medical leaves and only took his annual leaves at year end to spend time with us. Drive to Kedah or Penang to visit our relatives there.

My father was born in Kedah. Yan Kecik, Kedah. I still remember my grand father’s house although we haven’t been there for quite some time. The last time in 2002, to visit our late uncle that was critically ill then. He passed away soon after the visit. But that was in Sungai Petani, not Yan Kecik. I’d heard the house was rented out to another family. The crystal clear stream not so far from the house. Duck and fishes, it was just like in a travel advertisement shown in television, picture perfect.

His condition wasn’t getting any better so the hospital recommended to transfer my father to Mahkota Medical Center in Malacca. The hospital here was bigger, with spacious room and better facilities. That year we spend Hari Raya Korban in Malacca, with everyone sleeping in my father’s room and ate ketupat, rending, satay. It was a definitely special moments and quite bizarre, celebrating Aidiladha with the whole in a totally unique place……

Email ThisBlogThis!Share to TwitterShare to FacebookShare to Pinterest
Tag: essey

malam tadi pun a friend of mine just lost his mom..