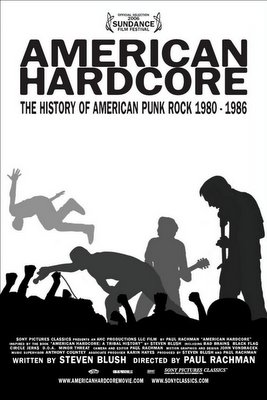 Directed by Paul Rachman, this documentary was inspired by a book American Hardcore : A Tribal History, written by Steven Blush . Looking at the list of bands and people that were included in this documentary really made me exited. Gang Green, Ian Mackay (Minor Threat, Fugazi), Henry Rollins (Black Flag), Brian Baker (Minor Threat, Dag Nasty), Bad Brains, Youth Brigade, Adolescents, Circle Jerks, Article of Faith. The list goes on and on.

There are some problems, though. The poster is too clean and didn't even have a hint at the 80's hardcore style ; edgy, and chaotic. Not 'cool' and stylish. Well, blame it all on Photoshop. At least they got the color right. Another surprise is that the documentary was released under Sony Pictures Classics. That soo not punk rock. They can released it on Yourtube and licensed it under creative commons if DIY (he did mention it in his press kit), anti capitalism & non-profit are their philosophy. Hmm maybe not. And, did hardcore cease to exist after 1986? Well, it is according to synopsis in their press kit.

The film was supposed to be made in DIY fashion with lots of rare footage and interviews with hardcore pioneers. The documentary ends at 1986, so don't expect bands like Earth Crisis or Gorilla Biscuits to be featured here. They do miss some big bands though, like Youth Of Today . Nonthe less, a documentary that I really looking forward to. You can search the internet for a DVD copy. Schedule to open in New York and Los Angeles on September 22nd 2006.

Weird... I was browsing and came across your blog....And what's even stranger, I just picked up the book at my local Barnes & Noble....Let's see if the documentary's any good...How's the hardcore scene in Malaysia?

well, hope so. The scene here is very much alive and kicking. Maybe you should come here and play some gigs. Ever been in this part of the world before?