Malaysian are increasing dependent on the web for news, rather then newspaper.

Newspaper readership worldwide seem to be slipping, according to a study in the US. According to Newsday. Traditional newspaper continue to lose ground to electronic and internet news outlet that seem to grow at a very fast rate.

Majority of major newspapers worldwide today have their own version of electronic newspaper. People are allowed to browse the latest news on their website, which is very close to the paper version. It is usually free but there are also some that charge user for a more detail and refine version on their electronic newspaper. 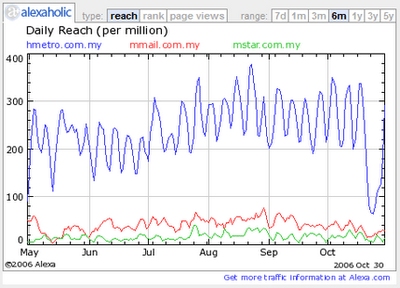 Apart from the usual news taken from news agencies, there is also a growing number of social networking website that allow user to submit news and hot topic to them, instead of relying on news agencies. These sites, such as Digg, Netscape and Newsvine are very popular because they did not only read the news but even contribute it to the website. This kind of website seem to be increasing popular with readers 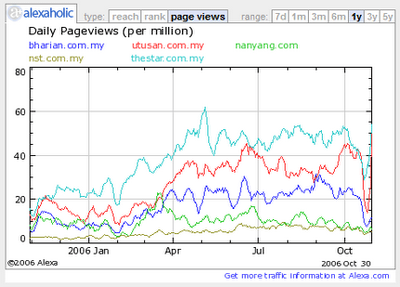 In Malaysia, number of users visiting newspaper’s website is increasing. The Star seem to be the most popular local news website, meanwhile for major Malay daily, there is not much differences between Berita Harian and Utusan Malaysia. This is only newspaper websites and did not include e-zines or news portal in Malaysia.

The reason? It easier to browse news on certain topic on the internet. And it's cheap, virtually free.
Posted by syed syahrul zarizi b syed abdullah at 11:30 AM